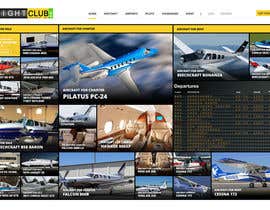 We need a homepage website design for "Flight Club".

We're looking to complete this quickly, so if we get a great design in the next few days, we will end the contest early and select a winner!

What the Site Will Do
This site will be for pilots to rent aircraft (mostly prop planes, but jets and helicopters will be possible as well) as well as the general public to charter flights. Also the ability to buy and sell aircraft. There will also be information to lookup airports by their ICAO or IATA codes. And information for learning to fly including finding flight schools plus flight clubs.

What We Like
We love the mockup designs for Escape Flight (see 8 EscapeFlight attachments)
The elements we especially like in their designs are...
- the departure board style split-flap letters and numbers plus the split-flaps with icons
- the red, white and blue edging that represents airmail
- the gradient light effects in the colors
- the yellow colors used
- the black split-flap departure board with the letters flying off
- we also like the idea of the large photo being used
We also like the idea of airport signage. Schiphol airport in Amsterdam has good signage which can be seen here: http://www.bing.com/images/search?q=schiphol+airport+signs
Using Avionics elements might be cool too: https://www.google.com/search?safe=off&site=&tbm=isch&source=hp&q=avionics+displays
I have included a couple of other website designs that we thought were interesting.
And did I say we really like the EscapeFlight designs? :)

Navigation
Home, Aircraft, Airports, Pilots, Passengers, Events, Members (Home would be optional since the logo would ultimately work for that)
The navigation will also need megamenu drop downs designed for Aircraft as well as drop down menus for Airports, Pilots, and Passengers.

Logo
We do not have a logo yet and it is currently being designed in another contest. You can use text for now.
UPDATE: WE HAVE A LOGO NOW - IT IS ATTACHED

Colors
We like blue (like the blue attachments)
We like orange (like the orange gradient in the orange attachment and used here: http://cactuswebsites.com/)
We like yellow (like the gradients in the attached EscapeFlight images)
We like gradient blacks (like the split-flap departure boards attached)
But seriously, we're open to whatever colors you come up with. If you choose a color that we don't like, we'll let you know.
The Best Looking Aviation Sites
http://www.dassaultfalcon.com/en/Pages/Home.aspx
http://www.mooney.com/
http://airroyale.com/
http://cessna.txtav.com/

The final design should be provided in an Adobe Photoshop .PSD format file and should have well named layers. The design should be large enough to fill the width of an HD monitor (1920px) without having large margins.

“An awesome designer! Followed directions extremely well! Delivered quickly every time! I will definitely use again!”